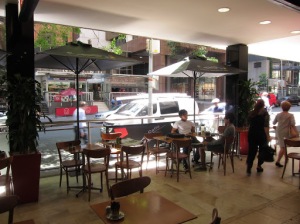 Friday: Met up with Chris and Marco today in the city for a catch up coffee. Chris, who is clearly getting annoyed by my inner west and around Town Hall wanderings, insisted we go further afield into the city.

Chris, in his fashion, walked us around a bit till we found a good place to settle. 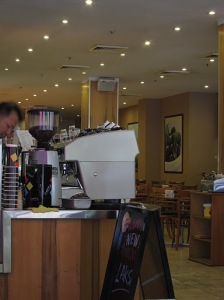 We ended up at the Ministry of Food on Bligh Street under the Wentworth Hotel. First thing you notice about this place is that it is huge, cavernous you might even say. There are tables everywhere. We grabbed a seat outside,which was really pleasant and ordered three coffees. Marco and Chris both ordered flat whites and I ordered an espresso macchiato.

Service was a little slow to start and reasonably non-personal, but then there were three of us at a table, so there was no need to be chatty.
Sitting here a while, you can begin to get a feel of the place. Firstly it’s clearly an eating-place rather then a coffee shop; inside they have a huge counter filled with a mix of food types (in keeping with the name) and secondly, it’s been here for a while and has a clear group of defined regulars. Thirdly, it’s totally a lunch and suit destination. I thought three guys wearing tee shirts stood out a bit. 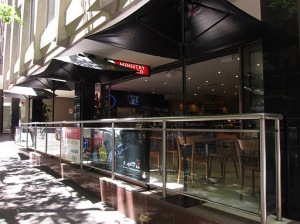 The coffee came out quickly and was placed in front of the three of us. The waitress made sure the teaspoon was behind the cup. Looking at the coffee it was nothing special. From my perspective little effort had really gone into the design on top of the flat whites (although Marco said he thought there was a cool design). Nor did the foam have that wonderful silky look that a good milk based coffee should have. This was only confirmed by my macchiato’s appearance, which for my preferences had too much milk, with again a dryish rather then smooth look to the foam. Aside from the total quantity it was portioned well.

The coffee, while having a dark rich aroma, lacked a little in flavour. Predominantly tasting quite acidic and bitter. However in saying that, there was some really interesting sub-tastes to this coffee, which I could not put my finger on, which makes me believe that there is a lot of potential to their Di Stefano bean. 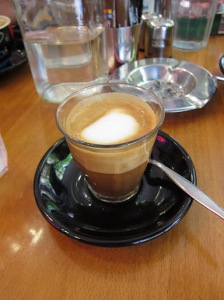 While I don’t think I will come back to this café, it was a nice
sitting location. I also liked the fact that you could put ice cubes into your water, which is simple, yet something which is just not done. Warm tap water sucks.
Scores
drink: 5/10
experience: 5/10
coffee: 10/20