Coffee: 16/20
Whole experience (cafe + coffee): 30/40
Bean: Mecca house blend
Monday: Found on the sight of a former Gloria Jeans, Mecca Coffee (Ultimo) is a true flower growing in the rubble of former coffee disaster. The Ultimo Mecca to me, really represents everything that is going, has gone right within the Sydney coffee scene.
Mecca, since being voted as Best Cafe by the Sydney Morning Herald Good Cafe Guide 2011 has gotten a lot of blogging love and now the hype has died down, I felt that on the same day I experienced Le Monde, I would also go Mecca (yes by blog posts are all out of order).
Found down Harris Street, just north of the ABC, in a location that has never really experienced much love, Mecca occupies that sexy Ultimo Road corner location which is more associated with drug deals or midnight muggings.
Walking in I can’t help but feel that whilst looking unrelated to look and feel of the classy King Street, the two cafes instantly connected. The jazzy music, passionate barista team, that Mecca roast smell, the struggling coffee tree pot plant, it’s what the brand does well (well they are shit at growing tropical plants). Where King Street feels old worldly Europe, Ultimo feel more a modern school/warehouse with chairs (I think they are the ones I sit on back in primary school) scattered about a range of tables, concrete floors and the compulsory exposed brick (gotta have it). Something to compare it against would be Coffee Alchemy, less cool, but far more friendly for non-coffee drinkers / those who like having a table.

I came in after lunch and the café still felt busy for a 2:30pm. The line moved reasonably quickly and I soon found myself quickly at the front of the line. I ordered a long black. I eagerly took a seat and watched the magic unfold.
The crowd here is a real mix, far less serious then King Street (city) but more serious then a King Street (Newtown), it’s a place to sit and overhear conversations between ABC staff members (“who is getting fired?”), students (“I’m going to be a journalist, who works at the ABC”) and coffee randoms such as myself (“my job is so sporadic I can come to coffee shops at 2:30 on a Monday arvo”).
The long black came to be quickly (the whole number system), it was presented in white china, nothing special here (unlike King), however, it had one of those amazing cremas you dream of. Like a mix between a cat’s eye and ying-yang symbol I find it hard to think what else you can do to make a coffee look more appealing.
The aroma is everything you would expect in a well-crafted blend. Deep fruity smells are what will first hit your nose, then, you’ll find some nice smokiness of the roast. 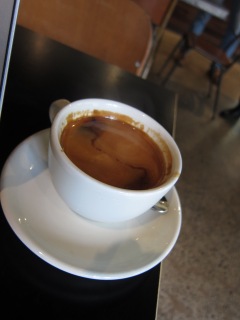 Taste wise this drink is ridiculously fruity and fun. Easy to drink from the get go, you’ll find the house blend very drinkable and both quite neutral and natural in the mouth. I am hard pushed to think of a more balanced drink, with each bean seemingly complimenting the next. The flavours are simple with peach tending to be the strongest flavour. Letting it sit brings out the peach further and makes for something delicious to linger over whist reading, talking or being a loser like me and typing.
I also ordered a panini (late lunch) and it came out just as fast. It was nothing really fantastic (pre-made), but hey we’re here for the coffee right?  And it was totally eatable and more then edible (They also have beer!).
Overall, Mecca is kinda brilliant. Its balanced coffee is a winner with a very fruity, well-developed flavour – just drinkable. Whilst the coffee shop feel may not suit everyone (food is a little lacking, I reckon, to score best café ever). There is simply nothing in the area that to compare it with and coffee-wise little in Sydney to compare it with. It would be an insult to call this the ultimate Gloria Jeans, but shit it should be, wish all chains would pull this weight. Mecca will leave you highly satisfied and will surely draw you back, if not for the coffee, but even just for the free coffee cupping sessions on Fridays.