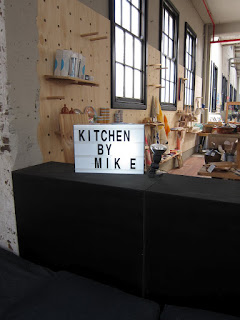 Is there any better feeling then waking up on a Tuesday and knowing you have the day off work? While many would happily head towards the beach or a park on this fine winters day, being the coffee nerd I am I head inside. Well, outside first then inside, to one of the most talked about cafes in the Inner West.

Winner of Time Out Sydney, café of the year, Kitchen by Mike has that Marrickville feel all over it but in Rosebury (not even sure where it is, geographically speaking).

After a short drive, navigated by Nerd 2, we get here at 11:30am right before the lunchtime fun. Tactfully, reading other bloggers comments on the location before we arrive, thinking we’ll walk in and know what’s what. However, we (I) still have the same issues with finding the entrance to the place.

Nerd 2 and I had to do a that awkward pause outside a place, in the car park before going in – “Is this the right place?”, “yes Rob it is, there are coffee cups over there”, “are you sure?”. I would recommend using the Street entrance rather then the strange car park entrance on the side.

Jazz in a large warehouse, Kitchen by Mike is not so much a revolution (as one may think by the reviews) as it is a fun café, with great food in a huge warehouse – think if IKEA got cool.

First, be smooth when you come in – yeah, you know that you can’t get food until lunch is called (who knows these things?). Just take a seat, grab a coffee and try work out what is going on. On this, Nerd 2 and I sat down and waited about 5 mins till we worked out there is not table service here. I went up and ordered a latte and earl grey tea.

The coffee and tea came out to us pretty quickly and during the wait I embarrassed Nerd 2 by pulling out the camera and walking around. It’s a ridiculously cool space. I love the long tables, fresh green stuff, and polished concrete with unpolished timber.

Arriving before 12 is a show in onto itself, people begin to pour in… from I’m not totally sure where and excitement builds as the food starts to come out. Luckily, most are as confused as I am over the system. I overhead someone say “it gets a bit mental” and mental is right.

The SMH describes Kitchen by Mike as “queuing for food doled out on enamelled tin plates and eaten at bare communal tables.” Totally nails it really, while this may sound rough it’s a great eating experience, be warned you will over order and you will pay for it.

The drinks arrived. The latte (not pictured) did not look too bad at all, there was a nice proportion to it with a good level of foam to milk, if a little milk heavy, but I’m being picky. The drink also had a reasonable heat to it, which should please the heat picky. Looks wise, it had a swirly art work on top, Nerd 2 thought it look like a post modern landscape, I’m not totally sure, the lack of art to me was a bit of a let down.

The coffee’s aroma was a sweet caramel flavour meets light tangy fruitiness, it’s a drink which I would describe has quite a pure smell, in that the roaster does not really seem to get in the way of the beans natural flavours. 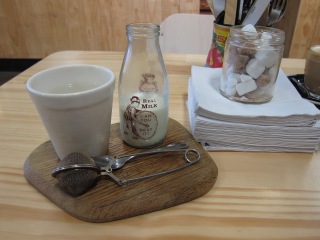 Taste wise I found the drink to be very clean and reasonably ‘fresh’, if a coffee could be described in such a way. It was a drink that was centred upon a caramel or perhaps toffee (could have been the cake I was eating) sweetness with hints of tangy fruity acidity. Perhaps the most interesting element of the drink would be the aftertaste that did not linger but had that minty or freshly picked herb taste to it. Like pulling leaves off basil or the like. It was a nice coffee and made more so by the synesso espresso machine pumping it out. I’m thinking they have their own blend or use a standard 5 Senses one very well.

Having had the coffee Nerd 2 and I went and lined up to get our hands on the meal. Lining up like a kids at camp is not a bad experience and the staff are friendly and helpful even with a huge line behind you. My naive skills at describing what I have just eaten will only let the meal down so let’s just say it was pretty and tasty.

Being the amazing nerds which we are, we hung around. I kept writing, she reading. At about 2:15 once the lunch lines had slowed down, I was greedy and went to get another coffee (pictured), part curious as to the lack of art from the first, part because it was a great coffee. The second drink looks fantastic and I thought far more on the mark as to what I would expect from such a café.

Overall, is Kitchen by Mike the world’s coolest IKEA or just a great Sydney café? Either way Kitchen by Mike is a fantastic edition to Sydney’s café scene. While Le Monde captures Sydney’s 2008 café mood, Kitchen by Mike I would say captures the way Sydneysiders are dining in 2012. Come down to where ever this suburb is, and hit  up Kitchen by Mike you’ll love it, well at least on a Tuesday, from what I’m told Saturday and Sunday are whole new ball games.